Many hobbyist/backyard fruit enthusiasts prefer to plant their jujube trees in large pots either because of their soil type, the tree’s suckering habit, or both. Keeping a tree in a pot also helps control its growth and manageability. And pots of course require potting mix.

This post is about an experimental homemade potting mix I made back in early August ready to use on the 13th August 2019, six weeks ago. I used this mix to plant, in pots, some jujube trees of the same age as those being delivered around that time — one year old fruiting stock, still dormant and not yet budding, that had been grafted onto older root stock last spring. Today is six weeks later, and those trees have since come into bud and are looking very healthy and leafy, so I have no hesitation in writing up about this now. (People further south and in climates with the colder nights and late frosts we just don’t get here in Wollongong wouldn’t have the leaf growth we have right now.)

Jujube trees will grow over a wide soil pH range from 4.5 (acidic) to 8.4 (alkaline). In China where they originate, these trees are grown in loess soils, which can range from pH 7 (neutral) to pH 9.5 (quite alkali). In other words, jujube trees’ natural habitat is one with a neutral to alkaline soil.

The word ‘loess’ comes from the German word Löss, from which the German word los and our English word loose derive. And these soils are indeed loose and crumbly, as they are comprised mostly of sand and silt with no more than 20% clay, all loosely held together with calcium carbonate (CaCO3).

Loess soils are generally fertile, porous and readily draining, and are amongst the most productive agricultural soils in the world — the Chinese for instance have been farming these soils for thousands of years. Loess fertility doesn’t come from organic matter, which is low, but is believed to come from the fine mineral-rich particles in conjunction with high pore space and cation exchange capacity. The Chinese have and do traditionally fertilise jujube trees with manures nonetheless.

Thus I wanted to emulate a ’soil’ with as many of these properties as possible. I didn’t want something too free-draining however, as this mix was intended for pots which can dry out quickly in hot weather. I needed a material that could hold and retain water for longer periods during the crucial flowering and fruiting hot summer months.

I settled on coir as this material. 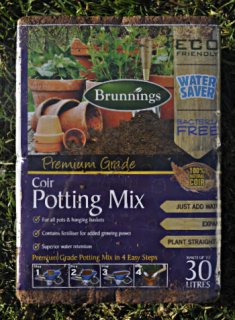 Coir, or coconut husks, comes in machine-compressed blocks that expand many times that size once wetted. The approximately 190 × 265 × 125 mm block at left weighed 2.65 kg and half-filled a wheelbarrow once the suggested 20 L water was added (right). 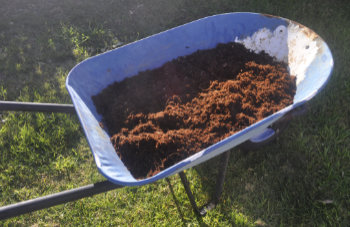 (You do need to break up the block with your hands to help things along.)

The packaging claims up to 30 L of material can be made, and that it contains fertiliser. I don’t know what the fertiliser is, as it isn’t specified and nothing is noticeably visible apart from coir fibres either before or after wetting and expansion.

That this product contains fertiliser is simply a beneficial side-effect anyway (though knowing what that fertiliser is and what it contains would be nice!). I chose coir for its loose texture and water-retaining properties. I was already very impressed with coir’s ability to hold water, having had excellent results with a trial run of a seed-raising grade of coir by the same manufacturer. Even in a greenhouse over 30°C the coir seed raising mix did not dry out anywhere near the rate the more soil-like seed raising mixes do, and watering was much less frequent. The (tomato) seedlings are absolutely massive, healthy and strong. (Your mileage may differ — always, always confirm others’ claims and results for yourself with small-scale trials you can afford to lose if necessary.)

This product also claims to have high porosity — it certainly keeps a loose, open appearance and doesn’t compact as overly wet soil can. Another advantage is that one of these blocks is cheaper than a 25 L bag of quality potting mix, and gives you more as well!

Having said that, the top quality potting mixes do come with Osmocote®, which more than justifies the higher price tag. These are still excellent products to use, and certainly a lot easier than making your own as I am here, especially if you only have one or two trees to pot.

Coir, being a natural product, will degrade over time and add organic matter to the pot. But apart from whatever fertiliser has been added (and of unknown concentration), it shouldn’t be regarded as an immediate supplier of nutrients. Thus we need a (known) booster, and for that I chose chicken manure. 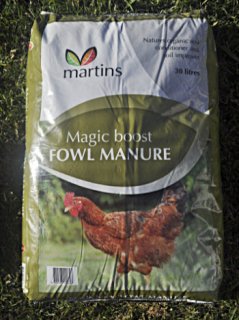 Chicken Manure
Manures in general have several beneficial properties that manufactured fertilisers do not, but it’s chicken manure specifically that has a name for itself in the jujube world. It is routinely used even by jujube orchardists here in Australia, and contains the most phosphorus of other manures. It made sense to add it to our composition!

Always use a well-composted or aged chicken manure so as to prevent ‘burning’ your plants with the excess nitrogen fresh chicken manure contains. Either start preparing this yourself the year before, or buy it already done for you, in bags (right). Some come in 25 L amounts, and some in 30 L amounts. This 30 L bag at right matches the 30 L coir potting mix nicely in my mind! 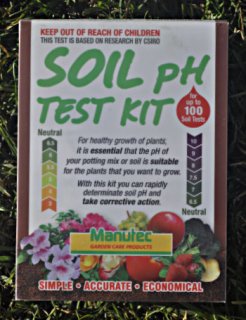 Remember how the Chinese loesses are neutral to alkaline in soil pH? I wanted to replicate that as well, so I needed a soil pH testing kit (left).

It would have been much easier to mix everything together and test the final pH in one go, but I was too curious and just had to know the pH of the individual components first! My results were:
wetted, expanded coir: pH 6.5
chicken manure: pH 7

It was now time to add everything together! 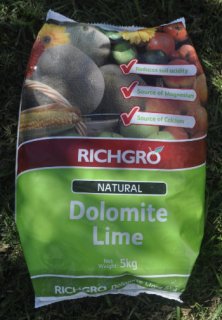 I added the whole bag of chicken manure to the wheelbarrow of coir and mixed the two thoroughly together. The pH of this mixture was around 7, but I wanted this to be more alkaline. Enter lime!

Remember from above how the Chinese loesses are held together with calcium carbonate (CaCO3)?

Both will raise soil pH as well as the other, but dolomite can add magnesium to a soil.

I chose to add the lime to the wheelbarrow in one go, followed by a thorough mix. If you do this too, I strongly recommend you let the mixture sit for a week before testing the pH (keep it moist). The lime will need time to dissociate into the mix and the pH reading will change accordingly. Alternatively you can add lime individually to each pot as you plant each tree.

Whichever method you may use, it is always best to err on the side of caution and add too little, than to try and correct an over-application later, You can always (and should) test a few months later and re-apply (or not). It is common for the pH to drop again in naturally acidic soils over several months.

After a week, the pH of the mix was 8.5 — I was aiming for 8, so this is a perfect lesson in adding too little rather than too much. Please don’t be misled into thinking that there isn’t much difference between pH 8 and pH 8.5 — every increase of one pH unit is a tenfold increase in alkalinity!

But because this was an experiment and I really did set out to plant jujube trees into a high pH, I went ahead and potted up some trees regardless.

If you do follow this ‘recipe’ and do wish to have a neutral-to-alkaline mix, but end up with a higher pH than you would like, simply dilute the mix. You could add more coir, or even some garden soil, whether your own if of good texture or that readily available from any landscape supplier.

I just then tested the pH of those pots — six weeks later — and the pH is still around 8.5.

One last thing I did when potting the trees back in August was add some PowerFeed®, the product made of rock minerals and soil microbes. I first learnt of this product too late to trial on jujube trees, but noticed very impressive results on neglected potted coffee and citrus trees and absolutely had to trial it this year!

It is too much of a stretch to claim that these small doses of rock minerals come anywhere near replicating the mineral-rich Chinese loesses, but it is still an addition of something approximating that environment (however loosely) that other formulations can’t.

More importantly, the coir is promoted as bacteria-free — they are probably referring to pathogens, but to me with a soil microbiology background I want microbes! Using PowerFeed® to inoculate the mix with beneficial soil microbes ticks that box for me.

So there it is, a ’soil’ that in no way resembles or comes close to being a Chines loess, but one with many of its properties:

Six weeks later the jujube trees do seem happy growing in it, and next week’s post is a photo essay of one of those trees over those six weeks (seven really, when the post comes out) as it comes into bud and grows leaves.

Kristi Ellinopoullos
BSc(Hons), U.Syd. - double major in biochemistry and microbiology, with honours in microbiology
PhD, U.Syd - soil microbiology
Stumbled into IT and publishing of all things.
Discovered jujube trees and realised that perhaps I should have been an agronomist...
So I combined all the above passions and interests into this website and its blog and manuals, on which I write about botany, soil chemistry, soil microbiology and biochemistry - and yes, jujubes too!

Would you like to donate if you found this article interesting or useful?